Skip to the content
SAVE 10% on your first order - Use Coupon Code - SaltDevilsFan
FREE Shipping on All Orders over $100!

Tail of the Tape 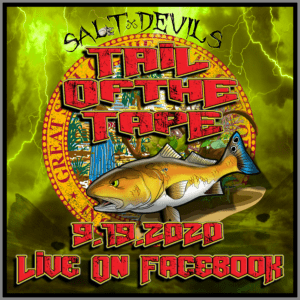 We are excited to announce the First Tail of The Tap Live Facebook Event!! Coming Live to you on Facebook and Youtube on 9.19.20 at 2:30pm. All the action will be presented to you LIVE as it happens as we all watch to see who will win the 1k+ Prize pool!!

On Saturday 9.19.20 3 Anglers Will be competing in the 1st Tail of The Tape Live Event. This event will be broadcasted LIVE on Facebook and Youtube for you entertainment. Our Broadcast will start at 2:30 pm with a 30 minute pre-fishing show followed by Lines in the Water at 3pm. Our 3 anglers are competing for the most points scored by 7pm.
The 1st Tail of the Tape will be a Redfish shootout. It will be a 3,2,1 Format. Which means each angler will score 3pts for every Red they catch that is overslot, 2pts for every red they catch that is slot, and 1pt for every red they catch that is underslot.
Each Angler has a Driver that may help them do anything they need except for actually catching the Species.
Each Angler has a Cameraman/Judge that will broadcast the entire event. They will also be the judge for the measurements.
The Angler with the most points at 7pm is the winner. In case of a tie. The first angler to put the final point up will be declared the winner. If both anglers put the final point up at the same time. The Largest Final Point will be declared the winner.
Stay Tuned as we will announce our Anglers Next Week!!
Holy crap this is gonna be so good. Full live shootout for everyone to enjoy!
We have had some interest in companies wanting to help sponsor this event, so here are all the different packages we will be offering!! All monies will go straight to the Prize pool. It is a WINNER Take All Event!!

Tail of the Tape is a live 3 angler shootout targeting various species that is broadcasted live on Facebook and YouTube. This event is hosted by Salt Devils in partnership with the Dirty South Fishing League.

All Packages will receive a 10 second Logo Reveal and a 30 minute Highlight video dedicated just to their company.

*Non-cash donations can be made but the item, product, or gift card value must be double the sponsor package tier amount.  For example, a sponsor may donate a $200 gift card to qualify for the Bronze package.

MADE IN THE USA - Save 15% with coupon code : REAPER Dismiss